The festive season is here, and we are loving it! It is a time that allows us a break from the events treadmill and time to relax with our friends and families. But before we go, find out what we have in store for your players in December.

One of the last releases is worth mentioning again as it fits to this month's festivities. Also, the launch bonus is still valid until December 15th ;) Santa's Reel Wheel by Spinlogic Gaming was released on November 23rd. Spinning Santa's Bonus Wheel could land a player an instant bonus or spark the Fireworks feature, which transforms the gameboard into 15 spinning positions, including all 3 Levels. During this feature, you’ll get 3 Re-Spins and a chance at the Grand Bonus of 1,000 times the bet amount! Santa’s Mega Bonus Wheel triggers the Fireworks feature or up to 20 Free Games, played at the next Level.

A monster adventure to unearth precious jewels in the newest game.
This 5X3 slot has 50 paylines and is packed with fun features like Nudging Wild Goblins and Free Games to rake in outrageous wins. 6 Golden Coins activate the Hold & Spin feature, awarding 3 Re-Spins with Coins kept in place.
The glimmering minecart is full of features and your players will love collecting these gems!

Strike it rich with the sea’s most seductive sirens in our newest game, Mermaid Royale. This 25-payline, 5x3 slot is overflowing with Treasure Chests, Sea Jewels, and thrilling features that will unleash your fortune!

The 3x1 Bonus Row boosts your potential for prizes, as special symbols trigger Expanding Wilds, Free Games, Re-Spins, and Oversized symbols.3 different Scatters give you a wealth of ways to reel in Re-Spins and Free Games. During Free Games, the middle reels transform into an enchanting Oversized symbol, and Special Scatters can activate Random Boosters with Multipliers, full-stack Wilds, or double the chance at Wilds. Take a spin to cash in big in the alluring underwater world of the Mermaid Queens! 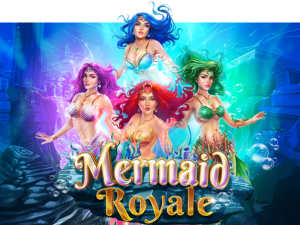 5 Reel Game - 25 lines
Extra 1x3 row with special symbols
The game has one extra 1-row and 3 reels row that spins simultaneously with the main wheelbox reels.
This extra row display 3 symbols or a blank space:

Symbols on the extra row may award:

Following are other promotions for December, one of which is the Game of the Months, whereby players earn double comp points for playing Santa's Reel Wheel.

Please get in touch, if you are unsure about what you can or should not promote.