February is near with great Promotions

Bye bye January and welcome month No. 2 of 2023, where we all get the opportunity to meet again at iGB Affiliate in London :) Make sure to use the link at the bottom of the page to reserve yourself a meeting with us at the show this February!

This is a game that promises a universe of epic prizes and adventure!

Alien Wins is the latest 5x3, 9-payline slot by SpinLogic Gaming. It has out-of-this-world features to boost your players chances of cashing in big. Wilds will morph to fill the reel, locking in place, for a Re-Spin. A Bursting Wilds feature landing on the reels, activating Cosmic Spins will guarantee wilds on reels 2, 3, or 4.

Players will love spinning with this colourful crew of extra-terrestrials!

It's all about gems in this upcoming game by SpinLogic Gaming. 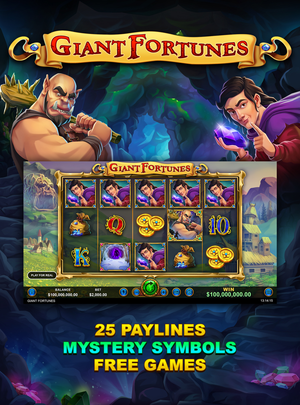 Giant Fortunes is a 5-reel, 25 payline slot, where the giant is Wild, and priceless gems unlock powerful features. If gems on reels 2, 3, or 4, a the Magic Gem feature starts, transforming them to the same random symbol. Landing gems on reels 2, 3, and 4 simultaneously awards 7 free games. A gem appearing during free games expands into an oversized symbol across 3 reels.
This enchanting, feature-packed game is sure to be a hit with your players!

Reels: 5
Paylines: 25
Volatility: Medium
Jackpots: No
Free Spins Eligible? Yes
Win Direction:    All symbols pay Leftmost to Right.
Mystery Symbol: Gem
Mystery Symbol: Rules
The Gem is the Mystery symbol, and it can appear on reels 2, 3 and 4 in the Base Game.
Gems change to the same random symbol after appearing.
Top Award: 50,000 times bet per line.
Wild Symbol: Giant
Wild Rules: Giant is Wild on reels 2, 3 and 4 and counts for all symbols except Mystery symbols.
Free Games Feature: Triggered by 3 or more scattered Minecart appearing on a normal game triggers a choice of 2 features.
Free Games rules:
In the Base Game, 5 Free Games are awarded if Gems cover reels 2, 3, and 4 entirely.
These Free Games start after the Gems have transformed into the same random symbol.
During Free Games, Gems only appear on reel 3. When a Gem appears during Free Games, after pays are awarded, it will turn into an Oversized Mystery symbol that covers reels 2, 3, and 4, which may grant new winnings. An extra Free Game is added when the Oversized Mystery symbol appears.
Platform: Download, Instant Play, Mobile

Following are other promotions for February, one of which is the Game of the Months, whereby players earn double comp points for playing Penguin Palooza.

​Lil Red is the game that players will play if they enter the monthly tournament in February.