Golden Euro Casino runs a "Moody April" promotion throughout the month of April, starting on the 3rd of this month. The offers vary, just like the weather in April. Bonuses can either be a no deposit, free spins, or different kinds of deposit bonuses. Players find out what the bonus is by simply checking the cashier daily to see the available bonuses.  Also in April the sequel of the slot game Lucha Libre is scheduled to be launched on the 18th.

A blistering sequel to the popular Lucha Libre has arrived! From the masters of fun at Real Time Gaming comes the enduring adventures of Taco Malo as he goes up against a new competitor - the fearsome and hulking Nacho Friend!When Wrestler Wilds cover their reel, they will either multiply prizes by up to x10 or jump onto other reels! Choose from three hilarious new finishing moves to try and win the final fight against Nacho Friend. Success in the ring improves the feature bonuses, with increased prize multipliers and potent Fist of Fury spins up for grabs. Experience mucho mayhem of the very best kind in this must-play new game!

Promotions exclude following countries: Greece, Indonesia, Mauritius, Poland, Romania, Russia, US. The bonus is not available until the day of the release which should be April 18th.

Link building has changed but it is still important non the less. We are forever looking for new ways to earn links while being careful not the upset Google with anything that looks unnatural. This article we found reminds us about the basics we should consider when looking at earning natural links. Follow the link to remind yourself: earning-natural-links 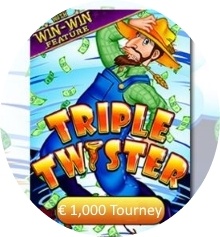 Golden Euro's monthly 1000 EURO free-roll is hosted by the game Triple Twister. The set-up is per usual: zero € for the buy-in, add-ons @ €4. We are sure your players will enjoy to play this whirlwind game!

Are you ready to become a storm chaser? Come out and play Triple Twister and hold on to something! Cause this reel-breaking twister will have you spinning with fun. Not only does every cloud have a silver lining, but every whirlwind will brighten up your day. When 3 or more scattered Weather Vanes appear Left to Right, you will be awarded 9 free games a feature that can be re-triggered!! And if that weren't enough a Win-Win feature will come right after you spin up your free games  guaranteeing you won't leave the feature empty-handed! So if you are ready to try your luck, you can't miss this Triple Twister chase a hunt for fun!