Swindle All The Way is Coming Soon

The new game this November is ringing in the festive season.

Hold on to your hats – the holiday season has arrived and two bumbling burglars are set on stealing the Christmas cheer in “Swindle All The Way”, the hilarious and entertaining new slot from Real Time Gaming!

The free games feature is triggered when 3 or more scattered “Swindle All The Way” logos appear anywhere. Pick from the windows to try and uncover the devious robbers hiding on each reel before they make off with their loot! Finding the robbers awards free games and prize multipliers, up to a cool 60 free games at x33! Settle back with a glass of nog, and join in the fun as mayhem unfolds in the delightful “Swindle All The Way”!

Players are invited to test this new game with a bonus, which will be available once the game is launched on November 22nd:

Players must be sure the game is launched before attempting to use the coupon!

SEO is a Matter of Opinion

Golden Euro's monthly free-roll is hosted by the game T-Rex this November. Remember, slot tournaments are only available on desktop. The set-up is per usual: zero € for the buy-in, add-ons @ €4. We are sure players will enjoy this old favourite! 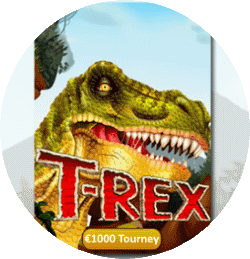 Ready to go back in time? All the way back to the Dinosaurs! Experience the world when tropical foliage covered the earth, volcanoes were widespread, dinosaurs roamed freely and T-Rex was the most feared dinosaur in the neighbourhood. But there is no need to fear T-Rex in this game. He is a favourite awarding double the prize when used in a winning combination. So make sure to come prepared and ready to search out the dinosaur eggs, they are filled with free games!

During normal play "T-Rex" only appears on reel 3 and substitutes for all symbols except scattered "Eggs". T-Rex Pick feature is triggered when 3 or more scattered "Eggs" appear anywhere. Select each "Egg" to reveal up to 10 free games per Egg. When T-Rex appears on reel 3 during free games he will eat all other dinosaurs appearing on screen and replace them with "T-Rex" symbols, before pays are awarded. The feature can be retriggered. Also, at anytime you may win the randomly-awarded progressive jackpot!