New October Game is out Today!

Golden Euro Casino presents the new Game Witch's Brew! This latest slot by Real Time Gaming has been developed to add to the popular Halloween themed series about wizards & witches.

Brew up some big wins this Halloween with ‘Witch’s Brew’, the bedazzling new slot from Real Time Gaming.

The Witch and Dragon Fang are Wild symbols that appear on reels 2, 3 and 4.

A bewitching re-spin feature is triggered when 3 of the same Wild symbol appear in any position on reels 2, 3 and 4. These reels are held in place while the other reels re-spin up to 10 times!

10, 25 or a huge 125 free games are awarded when 3, 4 or 5 scattered Goblin Blood symbols appear, with Wilds appearing grouped on their reels during free games, and all prizes are doubled.

With a dash of good fortune and a pinch of luck, you’ve got the recipe for a magical game!

100% up to €100 Deposit Bonus plus 10 FreeSpins
Coupon Code: WITCHSBREW
valid until October 31st 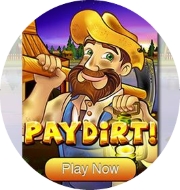 This month the tournament is hosted on the game PayDirt!.

Howdy Partner, the Gold Rush is back! Your sure to get Gold Fever playing this game. Let's search for Gold Nuggets and you might even Strike it Lucky. While playing, be sure to watch out for Cave-ins.

During normal play "Gold Nuggets" appear grouped on reels 2 and 4 and substitutes for all symbols except scattered "Paydirt! Signs". The game offers three bonus pick features called Gold Rush, Gold Fever and Strike it Lucky. 3 or more scattered "Paydirt! Signs" triggers a pick feature. Each feature awards a different number of free games ranging from 5, 10 or 12 free games depending on the "Paydirt! Sign" you picked! If Strike it Lucky is chosen, a Bonus feature appears revealing 5 Gold Mines. Select a Gold Mine to reveal a Bonus Symbol. Additional picks may be awarded, with each selected mine revealing an extra Bonus Symbol. 10 free games are then played, during which any Bonus Symbol appearing will be replaced with a Gold Nugget, before pays are awarded. Any re-trigger will add 5, 10 or 12 free games to the current free game series, depending on the pick feature awarded. Also, at anytime you may win the randomly-awarded progressive jackpot!